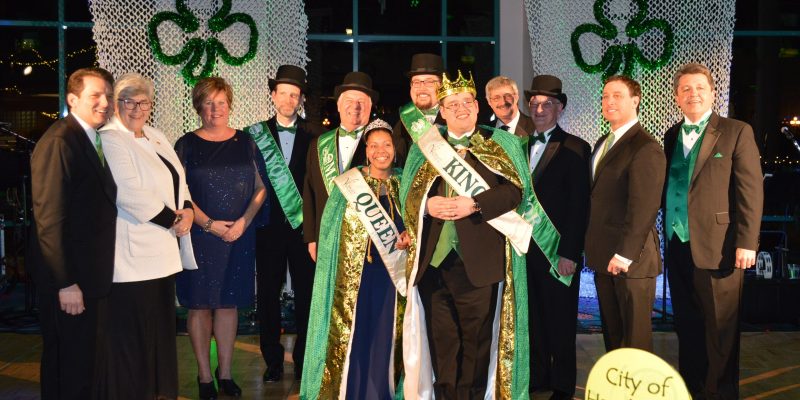 A new word “charity” has been added to the event’s name to draw attention to the fact that this is a major fund-raiser for a not-for-profit 501 (c) (3) organization, and not a St. Patrick’s Day celebration for politicians  Much of the money collected is used to make Valley Industries the best place it can be for its workforce.  In addition to being committed to customer satisfaction, Valley Industries is equally committed to all 200 employees.  Their goal is to offer a high-quality employment program which builds morale, and rewards hard work and productivity.

Valley Industries employees are some of the most efficient and loyal workers that can be found anywhere.  To maintain this high-level of worker performance, Valley Industries offers an Employee-of-the-Month Program and Perfect Attendance Program.  The organization also uses funds from the Ball to host monthly dance nights, barbecue days, as well as an annual Thanksgiving Dinner and Christmas Party.  “We try to take advantage of as many employee team building opportunities as we can to help build a sense of family or comradery among our workforce,” Valley Industries Executive Director Jim Guyre said. “The Shamrock Charity Ball monies enable us to expand our resources in order to keep our workers motivated, happy and productive.”

Valley Industries first opened its doors for business on March 13, 1967, under the name of Florissant Valley Sheltered Workshop with only 15 employees.  Today, the Workshop employs more than 200 workers with developmental disabilities in a 60,000 square-foot facility in Hazelwood.  On any given day, Valley Industries employees work on 15-20 different jobs.  The organization specializes in contract packaging, kitting, shrink wrapping, collating, assembly, inspections, and blister packaging.  Valley Industries is both ISO 9001:2015 Certified and FDA-registered.  They are committed to customer satisfaction through audited quality processes.

“In Missouri, we refer to places like Valley Industries as extended employment sheltered workshops.  This is where, by statute, only adults with developmental disabilities are employed to work, except for the staff.  The tasks assigned to them match their ability to work. Some require a one-step process while others require a higher degree of difficulty.  The overall goal is to ensure that everyone who comes to work gains a sense of pride and feels like they’re making a difference,” Guyre added.

Over the past 12 years, the Mayors’ Shamrock Charity Ball has evolved into one of St. Louis region’s must-see social affairs!  With its Irish fare of fun, great food and lively dance music, it has become the place to be and be seen with influential business leaders and elected officials.  It also gives residents who live in Black Jack, Ferguson, Florissant, Hazelwood and Bellefontaine Neighbors a great opportunity to meet their elected officials during the event.  Individual tickets for $125 each (purchased online here) usually sell out fast because no one wants to be left out of going to North County’s biggest social soireé.  Guests come dressed up to dance the night away, enjoy delicious food and win fabulous super raffle prizes – all for a great cause.

This will be the third consecutive year that KSDK-TV’s Chief Meteorologist Craig Moeller has agreed to be the program’s Master of Ceremonies for the evening.  He believes this is a great charity event to support and sees it as an excellent opportunity for him to meet many of his “5 On Your Side” viewers in person.  Both he and his wife, Anne, look forward to attending this year’s event.

Those who purchase event sponsorships also receive individual tickets.  Contact Jim Guyre, Valley Industries’ Executive Director, at (314) 731-1771 for more information on sponsorship perks.  So far, the Delmar Gardens Family and The Florissant Rotary Club have made commitments to be Event Sponsors at the $5,000 level.  This year’s Emerald Sponsors at the $2,500 level include Karen McKay, City of Hazelwood, North Point Development and Christian Hospital, BJC Healthcare.

A new sponsorship package being offered is called the Deluxe Dual Pot of Gold & Golf Sponsor for $2,250.  Those who donate money for this package get to sponsor two events with one payment!  In addition to having the company’s logo predominately displayed at both events, they receive six tickets to the Ball with reserved seating and a special gift.  They also get an Eagle Sponsorship for the 7th Annual Charity Golf Outing in September 2019 which includes one tournament foursome, valued at $1,500.

For the ninth consecutive year, the Delmar Garden North Campus will graciously host this fund-raising event at the beautiful Garden Villas North Retirement & Assisted Living Community, located at 4505 Parker Road, in Black Jack.  In addition to festive decorations, ice sculptures and mood lighting, the facility’s dining area will be transformed into an elegant ballroom atmosphere one would normally find on a cruise ship.  Other features include nine restaurants and catering services manning food stations scattered throughout the dining facility.  These restaurants will be serving signature food dishes, hors d’oeuvres, pastries and desserts.  The participating food vendors include Amore’s Pizza; Catering to You; Helfer’s Pasteries & Deli; Irma Jean’s; Mattingly’s; Papa Murphy’s; Paul’s Market; The Savoy Banquet; and TKO Grill.

Garden Villas North will partner with Delmar Gardens North skilled nursing center to transform their penthouse apartment into a martini lounge on the third floor.  Other apartments will feature wine tasting and a candy room.  There will also be a photo booth set up where people can pose for pictures and have them put in special frames to take home as mementos.  These activities just mentioned are being sponsored by The Delmar Gardens family.  Near the front entrance, coffee connoisseurs will be able to sample richly flavored brews at the Ronnoco Coffee Barista Bar.

Since the first Mayors’ Shamrock Ball held 12 years ago,  The Bob Kuban Band has stepped up to provide the dynamic, high-energy dance music at each of the annual fund-raisers.  His 8-piece rock ‘n roll band known as Bob Kuban & The In-Men is famous for its classic one-hit Top 40 song, called “The Cheater,” which reached #12 in the U.S. pop charts in 1966.  That same year, the group hit #70 on the Top Charts with “The Teaser: and #93 with a rendition of the Beatles’ “Drive My Car.”  Born and raised in the North County area, Kuban has established a tradition of musical excellence performing literally hundreds of concerts, weddings and special events on a yearly basis with his Bob Kuban Brass.  He knows how to keep the place jumping with a variety of musical genres to satisfy everyone’s tastes, keeping the dance floor busy all night.

CROWNING OF THE KING AND QUEEN

Each year, Valley Industries selects a Gentleman Worker of the Year and a Woman Worker of the Year from a pool of “Employee of the Month” candidates in 2018.  This year’s honorees are John Shaughnessy and Mary Wojciechowski.   They will be crowned as the King and Queen of the 12th Annual Mayors’ Shamrock Charity Ball.  Their first act as royalty will be to cut the official Mayors’ Shamrock Charity Ball cake, which will be baked, decorated and donated by Helfer’s Pastries & Deli.

Shaughnessy came to Valley Industries after the closing of Universal Workshop in 2005, which was a definitely VI’s gain!  Over the past 13 years, he has proven to be a valuable asset on kitting jobs, various battery jobs and breaking down boxes for recycling. Shaughnessy also has excellent attendance, which shows his great work ethic.  His co-workers and supervisors would characterize him as an easy-going, polite and caring individual.  In addition, he’s a huge sports fan.  Not only does he love the St. Louis Cardinals, but he loves to watch other sports including NASCAR.  In the past, he participated in a variety of sports himself, including softball, basketball and bowling with the Special Olympics.  But a shoulder injury caused him to retire from active participation; however, he still loves to keep up with what’s going on in the sports world.  He now has a laptop and smart phone to help him keep track of game scores and stats.  Five years ago, Shaughnessy decided he wanted to learn how to read.  His mother hired a tutor for him and he’s been taking regular classes to this day.  He also likes to stay healthy and helps around the house doing laundry and preparing his own meals.

Wojciechowski is a model employee.  She is always happy and smiling. In addition, she can be characterized as being very soft spoken and pleasant to be around. Her supervisors say she is an awesome checker.  They can rely on her to pay attention to detail and catch any rejects that come her way.  Wojciechowski has worked on kitting jobs, along with hanger inspection jobs and many shrink wrapping jobs.  She is an integral member of the lottery kitting crew. Plus, she is a member of the enclave crew.  According to her sister, “Mary absolutely loves her job at Valley Industries!”  To demonstrate her strong work ethic, she has received the perfect attendance award for the past six quarters, which is a year and a half.  One of her biggest joys is music.  In addition to listening to music CDs, she is very knowledgeable about many of the musical artists and likes watching these favorite TV shows: American Idol; The Voice; Dancing with the Stars; and Wheel of Fortune.  Her other interests include playing the piano, getting together with family, going out to eat and enjoying her favorite treat after church on Sundays at Starbucks.