Valley Industries > About Us > Our Team > Jim Guyre 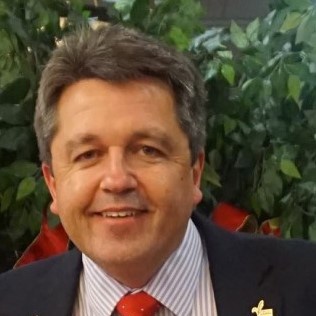 Jim started work at Valley Industries as a volunteer during his high school service program in 1985 and was inspired by our outstanding workers to remain onboard. He subsequently applied for a job and was hired as a production supervisor. He has worked in almost every position and department since then. In 1990 he was promoted to Production Manager at the newly acquired Olivette facility. As part of the management team, he helped lead the efforts to make the shop a viable entity. In 2001, at the time of the consolidation, he was promoted to Plant Manager and helped to bring both workshop locations into one smooth efficient operation with growing customer contracts. In 2007 upon the retirement of Steve Frank, he was promoted to General Manager, and in 2008 upon the retirement of Carol Simms, he was promoted to Executive Director where he continues to serve. Jim received his Bachelors of Business Administration degree from Fontbonne University where he graduated Magna Cum Laude in 2010. Jim oversaw the implementation of our ISO 9001:2008 Certification of our Quality Management Systems in 2008, and from the spirit of ISO, has been helping to move forward with continuous improvements into all departments of Valley Industries. Jim will have 32 years’ experience serving Valley Industries in May of 2017. Jim is an active member, past board member, and past legislative chair of the Missouri Association of Sheltered Workshop Managers (MASWM), serves on the board of North County Inc., and is a member of the Rotary Club of Florissant. Jim keeps Valley Industries actively involved with the local chambers of commerce and local community efforts. Outside of work Jim is an active member of St Johns UCC and enjoys camping and ATV riding with his family.